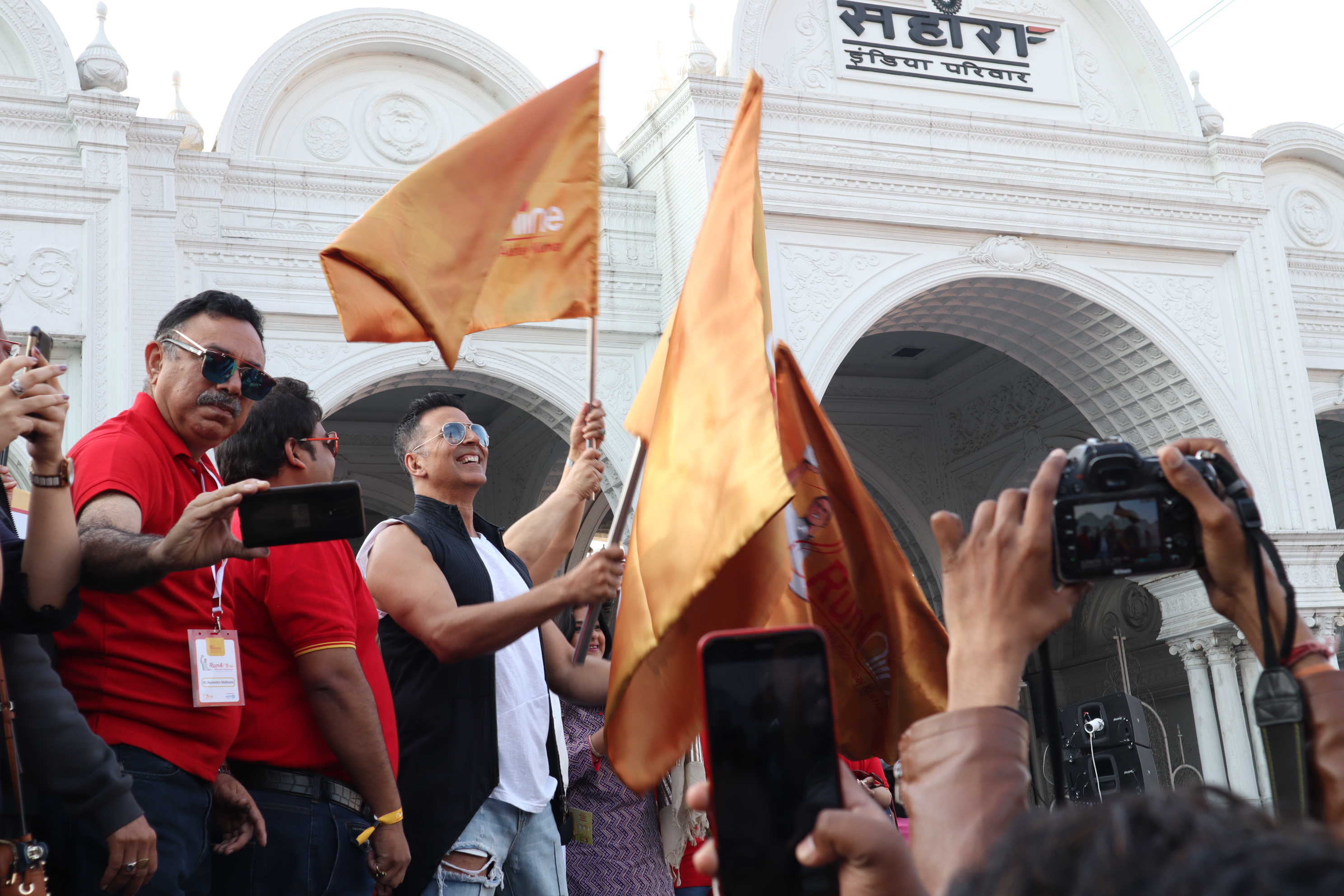 Megastar and the Pad Man of India Akshay Kumar flagged-off Run4Niine at Sahara Shaher in Lucknow – the largest nationwide run to take place in India to end taboos around menstruation – on the 8th of March to mark International Women’s Day 2019.

An initiative by Niine Sanitary Napkins, the made-in-India affordable yet premium sanitary napkins brand, Run4Niine was supported by the Niine Movement which launched the nationwide #18to82 campaign movement to bridge the gap between the 18% of menstruating females in India who use sanitary napkins, and the 82% predominantly engaging in unhygienic and unsafe alternatives such as old cloths, rags, hay and even ash.

The pan India event saw over 1,00,000 participants across more than 500 cities in 20 states in India including Lucknow, Gurgaon, Delhi, Mumbai, Kolkata, Raipur, Visakhapatnam, Ludhiana, Panjim, and Howrah.  Participants from across all genders, ages and abilities, ran, jogged, walked and wheeled for the noble cause of highlighting the importance of safe menstrual hygiene practices and to break the taboo associated with periods.

In Lucknow, over 4,000 participants joined megastar Akshay Kumar at Sahara Shaher for the run, followed by a special concert by singer, songwriter and performer Darshan Raval who performed some of his most popular songs at the event aimed to smash the stigma on menstruation.

Akshay Kumar took his commitment to supporting fem-force to a new level when he was seen sporting pink trousers at Run4Niine as he made his grand entry into the auditorium joined by the famous all-women biker group, on their motorbikes. He then took to the stage for a series of interactions with strong women empowerment champions.

Speaking on stage about his association with Run4Niine, megastar Akshay Kumar said, “I am excited to be partnering with the Niine Movement to encourage an open and unashamed discussion on menstruation with my fellow citizens, pad heroes, change makers and pathbreakers for the Run4Niine. Each one of us that takes part in Run4Niine helps to create an unstoppable force that will beat the stigma around periods.”

Run4Niine is an initiative by Niine Sanitary Napkins, a challenger brand in the menstrual hygiene sector of India. Co-founded by leading Gorakhpur social-entrepreneurs, Amar Tulsiyan and Gaurav Bathwal and Kanpur entrepreneur Sharat Khemka, the brand entered the market with products that have leveraged the innovation and expertise of international experts in the United States who have extensive experience in designing products in the sanitation and hygiene space. Niine Sanitary Napkins is also the first sanitary napkin brand in India, which comes with a disposal bag and the first to launch a Period Tracker app.

Speaking about the Run4Niine Lucknow, Amar Tulsiyan said, “My heartfelt gratitude to so many thousands of people across hundreds of cities who took part in Run4Niine. I was also glad to see so many boys and men joining hands to raise their voice against the stigma around menstruation. The Chain of Niine has never been stronger, and I’d like to thank JCI India, FOGSI, Mr Akshay Kumar, for their support. People usually run for their own fitness and health. This International Women’s Day they ran for awareness of health of woman of country especially during menstruation. Niine was created to break the silence and the stigma around periods in India. Today I can truly say that we are not alone in that wish, and that we are one step closer to improving menstrual hygiene awareness for all.”

Speaking about the significance of the Run4Niine, Amreesh Chandra, Vice Chairman, CEL and Global Ambassador of Niine said, “Run4Niine is truly a landmark moment for the Niine Movement, and for the conversation around menstrual hygiene as a whole. The enthusiasm that the run has received across cities shows the real support across India for breaking the taboos around menstruation. As an educationist I am sure Niine will play a major role in the eradication of girl absenteeism in schools on account of menstruation. I would like to thank our partners JCI India, FOGSI for their strong support and Sahara for a beautiful venue for a noble cause, and other organisations and everyone who has registered to Run4Niine, showing the world that India will no longer be silent about periods.”

Run4Niine is being organised in the support of esteemed partners and is powered by JCI India, the non-profit organisation encouraging young people to be active responsible citizens and to take the ‘Let’s Talk About Periods’ message to the streets of hundreds of cities. It is supported by Federation of Obstetric and Gynaecological Societies of India (FOGSI), a long-term partner of Niine and one of the largest membership-based organizations for specialized professionals within the field of obstetrics and gynaecology in India, who have also been organising workshops in several cities where Run4Niine activities are taking place to help encourage more people to take an active role. Run4Niine national partners include: Fortis Hospitals as medical partner across the cities they are present, and Coca-Cola as beverage partner across 10 cities including in Lucknow.

Speaking about their role in taking the Run4Niine message to hundreds of cities across India, JCI India 2019 President Shirish Dundoo and JCI India 2018 President Arpit Hathi, who are mobilising support for Run4Niine across cities jointly said: “JCI India is proud to have a partner like Niine for the initiative ‘Run4Niine’. It has been brilliant to see so many young people across the country taking action and running, walking and more to show their support for menstrual hygiene awareness. It is shocking that there is still a stigma and taboo about periods that restricts women and girls across India – but the Run4Niine has shown that people across of India – young and older seek a change for the better. We are pleased to have played a role in this and look forward to working with Niine on future initiatives. JCI India has association with Niine with common interest to address the women health issues.

We are associated to bring awareness among women for proper menstrual hygiene. Our aim is to educate women across the country to overcome the taboo of menstruation. We ensure that sanitary awareness reaches those most in need under the Prayas program. We are promoting women’s health awareness with this project as a part of Impact 2030 which is integrated into the UNSDG (United Nations Sustainable Development Goals). Let’s all Inspire youth, Inspire leaders, and inspire Change to create an impact in society and bring awareness about menstrual hygiene in women and girls. On this International Women’s Day let’s all support our sisters through this Prayas and Run4Niine for a better world.”

FOGSI 2018 President, Dr Jaideep Malhotra and FOGSI 2019 President, Dr Nandita Palshetkar jointly said: “We are extremely proud to be associated with Run4Niine and truly believe in their vision to tackle menstrual taboos. We will be conducting workshops across India to help encourage people to start a dialogue on periods.”

Rotary International District 3120, District Governor Rtn Stuti Agrawal and President Rotary Club Lucknow jointly said: “We have been working with the Niine Movement to raise awareness of menstrual hygiene for over a year and more than eve before we are committed to ending every taboo around menstruation. Run4Nine has been an incredible opportunity to bring together everyone for one cause.”

Run4Niine is also supported by WaterAid India, an international not-for-profit determined to make clean water, decent toilets and good hygiene normal for everyone, everywhere within a generation, and UN Women, the United Nations entity dedicated to gender equality and the empowerment of women.

Speaking about the importance of menstrual hygiene awareness, Farrukh Khan, Regional Manager (North), WaterAid India said, “Menstrual hygiene management is an important area of work for WaterAid. We use an approach that is comprehensive and focuses on addressing taboos while also creating an enabling environment to foster change. We believe that the issue needs a holistic approach that addresses all aspects, be it ensuring access to products, infrastructure or safe disposal of waste.”

Speaking about UN Women’s work in menstrual hygiene awareness, Nishtha Satyam, Deputy Representative, UN Women India MCO, said “Access to sexual and reproductive services and information is linked to all the aspects of women empowerment. The fact that only 18% of the women in India have access to sanitary napkins is a stark reminder of the efforts required to uproot misinformation at a grassroots level. Menstrual hygiene is also a sanitation matter. We need to provide more WASH (water, sanitation, and hygiene) facilities for women and girls, so that they can access all spaces in a safe and dignified manner. UN Women is pleased to support Niine Movement’s nationwide ‘Run4Niine’ this International Women’s Day.”