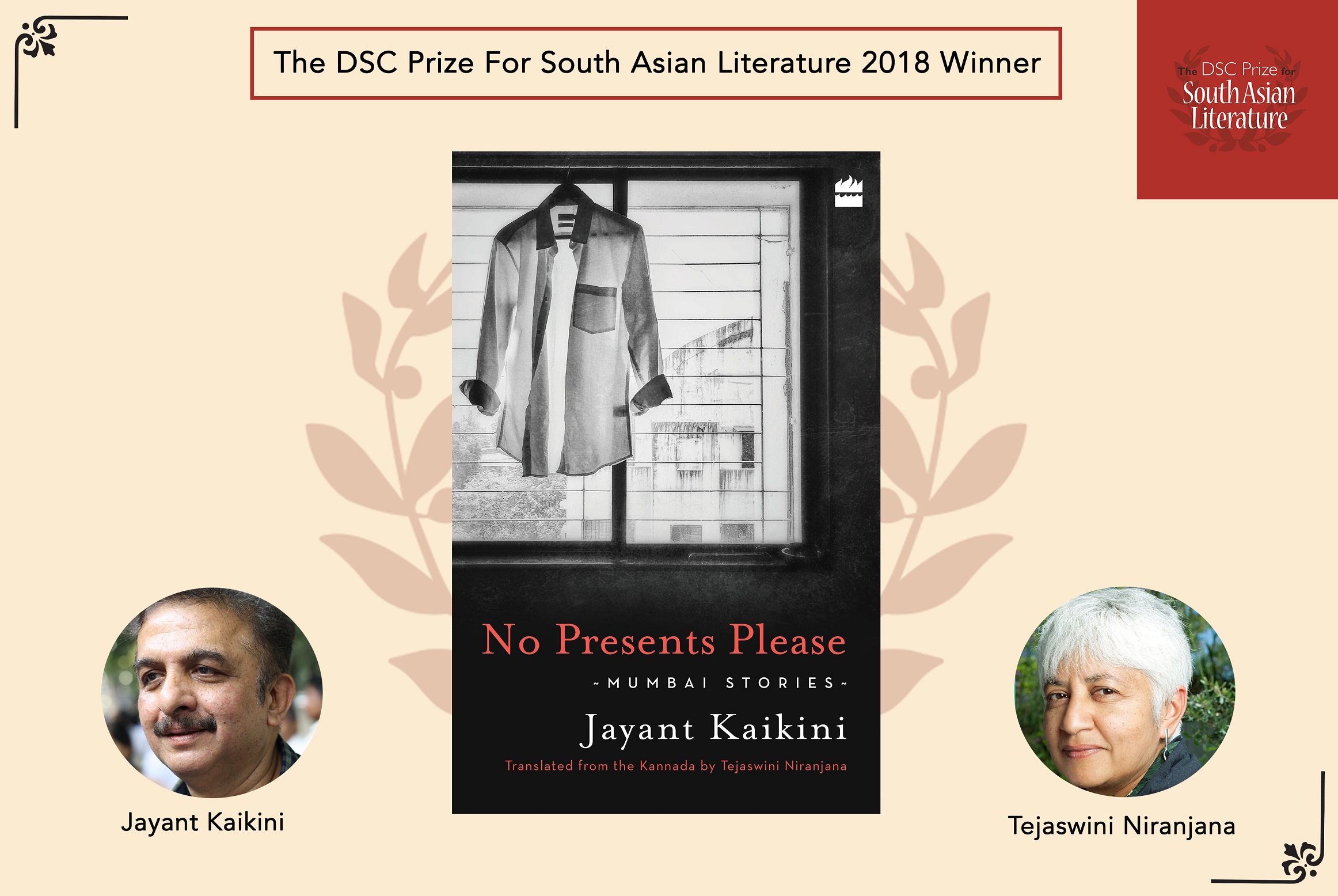 ‘No Presents Please’ originally written in Kannada by noted author Jayant Kaikini and translated into English by eminent translator Tejaswini Niranjana has been announced as the winner of the prestigious DSC Prize for South Asian Literature 2018 at the Tata Steel Kolkata Literary Meet in Kolkata, India. The DSC Prize has always encouraged writing in regional languages and translations, and this is the first time that a translated work has won the prize. This magnificent book gives us a protagonist that is vivid yet full of contradictions, spirited yet lonely, embattled yet big-hearted – the city of Mumbai. Empathy and survival are the constant, codependent themes that unify every strand of this extraordinary book, creating a shimmering mosaic of a conflicted city that is as kind as it is, at times, cruel.

In a glittering award ceremony, the US $25,000 DSC Prize was awarded to Jayant Kaikini and Tejaswini Niranjana along with a unique trophy by eminent writer Ruskin Bond. As per the prize process, the prize money would be equally shared between the author and the translator. The world’s literati including writers, publishers, media and literary enthusiasts who had gathered for the Award Ceremony at the iconic Victoria Memorial Hall enthusiastically applauded the winner of the DSC Prize 2018.

Jury Chair Rudrangshu Mukherjee, speaking on behalf of the jury said, “The jury decided to award the DSC Prize for South Asian Literature 2018 to ‘No Presents Please’ by Jayant Kaikini which has been translated by Tejaswini Niranjana and published by Harper Perennial. The jury was deeply impressed by the quiet voice of the author through which he presented vignettes of life in Mumbai and made the city the protagonist of a coherent narrative. The Mumbai that came across through the pen of Kaikini was the city of ordinary people who inhabit the bustling metropolis. It is a view from the margins and all the more poignant because of it. This is the first time that this award is being given to a translated work and the jury would like to recognize the outstanding contribution of Tejaswini Niranjana, the translator.”

Malavika Banerjee, Director of the Tata Steel Kolkata Literary Meet, made the opening address and welcomed the DSC Prize to the city of Kolkata. As part of the evening program, the 5 member international jury panel of the DSC Prize was introduced, the shortlisted authors read excerpts from their books, and culminated with Ruskin Bond, the Chief Guest for the ceremony, presenting the trophy to the winner of the DSC Prize 2018.

Congratulating the winner, Surina Narula, MBE and co-founder of the DSC Prize said, “My heartfelt congratulations to author Jayant Kaikini and translator Tejaswini Niranjana for winning the DSC Prize for South Asian Literature 2018 for their brilliant book ‘No Presents Please’. It was a pleasure reading the shortlist. The challenges faced by the authors to weave their protests against the wave of anti globalization into their writings of seemingly harmless pieces of literature could be seen through their work, migration being a major theme this year. The DSC Prize has completed eight years and reading South Asian literature written in English including translations has enabled larger global audiences to understand the issues globalization has brought about. The jury as usual has to do the difficult task of selecting the better amongst the best. My congratulations to the jury for their excellent choice of the winner.”

The DSC Prize for South Asian Literature 2018 was judged by a diverse and distinguished five member jury panel comprising eminent figures drawn from the international literary fraternity who have worked in or around South Asian literature and issues. This year’s international jury panel included Rudrangshu Mukherjee, Jury Chair, Professor of History and the Chancellor of Ashoka University and an internationally acclaimed historian of the revolt of 1857 in India, Nandana Sen, a writer, actor and child-rights activist and author of six books, who has worked as a book editor, a poetry translator, a screenwriter, and a script doctor, Claire Armitstead, who has also been a theatre critic, arts editor and literary editor, Tissa Jayatilaka, who was the Executive Director of the United States-Sri Lanka Fulbright Commission and is the author of several publications and has translated and edited many journals, and Firdous Azim, Professor of English at BRAC University, Bangladesh, whose research has focused on women’s writings in the early twentieth century Bengal.