In the spirit of celebrating women empowerment and spotlighting the inequalities and injustice that millions of women face around the world, Sister Sledge, the iconic music group famed for their award-winning, worldwide hits such as We are Family, Lost in Music and World, Rise and Shine, lent their voices and support in solidarity for International Women’s Day and a range of initiatives, to globally recognise the achievements of women as well as highlighting the issues faced by them in society.

The group brought forth a strong message of love, family and female empowerment by participating in various events and panel discussions, convening citizens, public figures, renowned personalities and business leaders. 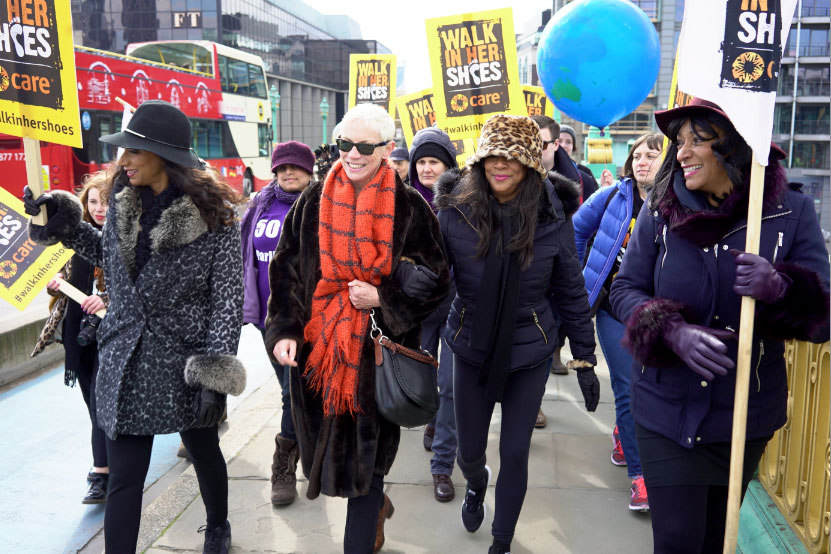 Kick-starting the group’s activities this week was the Care International’s ‘Walk In Her Shoes’ march in London, which took place on Sunday 6th March 2016. Sister Sledge joined influential female figures such as Annie Lennox, Bianca Jagger and Helen Pankhurst, the great-granddaughter of the Suffragette leader Emmeline Pankhurst, who led the march ahead of International Women’s Day. The event comprised of music, keynote speeches by Helen Pankhurst and Bianca Jagger, who outlined the proceedings and importance of the event along with The Rt. Hon. Justine Greening, UK Secretary of State for International Development. A Q&A panel with guests was hosted by The Daily Telegraph’s Women’s Editor Emma Barnett, featuring eminent speakers such as Annie Lennox, Leyla Hussein (an award-winning campaigner on FGM and gender right) and Natasha Walter, author, founder Women for Refugee Women, followed by a Comedy performance from Bridget Christie.

Everyone then assembled for the walk over Millennium Bridge and reconvened at The Scoop for Sister Sledge’s finale performance of their greatest hits. To get everyone in the disposition for women empowerment, Kim Sledge also recited powerful words by Sojourner Truth, an African American Abolitionist born into slavery, who escaped with her infant daughter and in 1862 became one of the first pioneers for women’s rights, adding a truly global dimension to the female change-makers in the world. 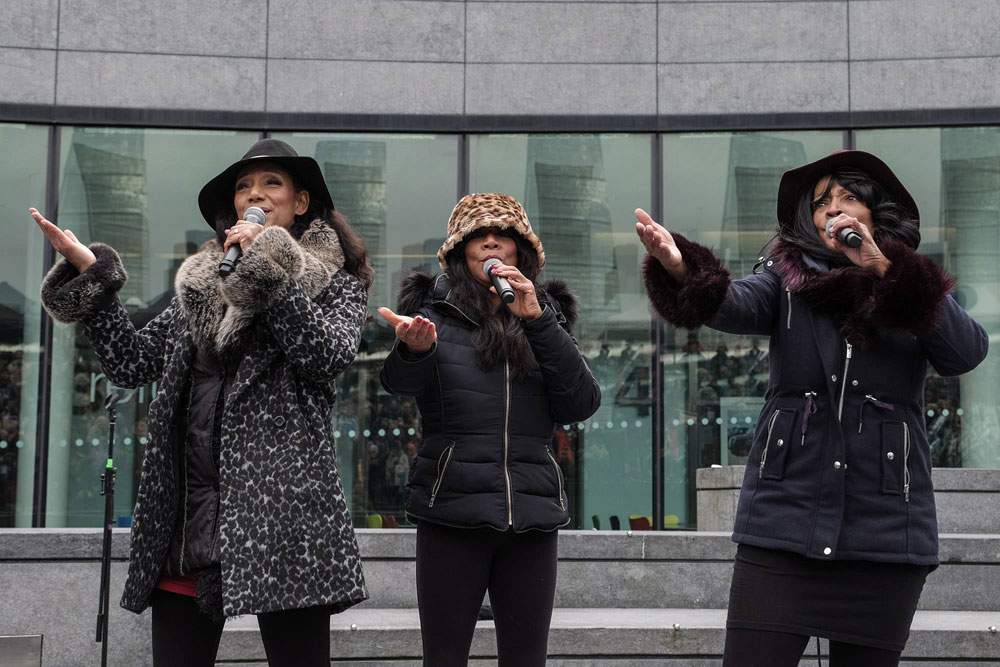 On International Women’s Day itself, Sister Sledge participated in a panel discussion with BBC Radio 1 DJ and broadcaster, Gemma Cairney as part of the South Bank Centre’s  WOW Festival. Cairney discussed the music industry with Sister Sledge, while laying emphasis on the inequality in representation of women in the industry and the difficulties faced by them trying to break into the industry. 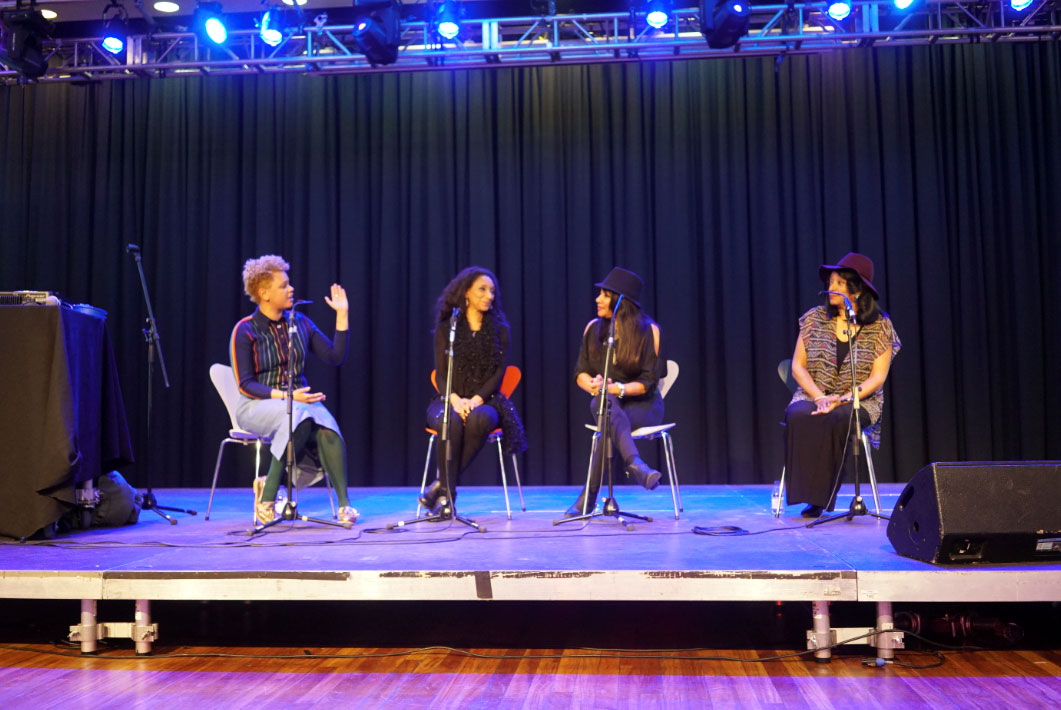 Sister Sledge raised awareness of the struggles that women face in daily life – and on issues of growing inequality in society, which has become a serious matter and is something that must be addressed. The group spoke about their experience in the music industry and their own personal struggle of entering the industry in an age and time when it was a male dominated business. Debbie Sledge spoke about her faith in family values while expressing her love for her sisters worldwide.

On Saturday 12th March, Kim Sledge will be participating in the panel discussion, ‘Redressing the Balance: Women, Power and the Arts’, focused on pressing issues of inequality in the arts industry by raising questions which challenge the current convention on these issues, whilst emphasising how to address the imbalance and celebrate the creative power of women. The panel will comprise of industry experts including Barbara Hulanicki, Fashion Designer and Founder of Biba, Sandeep Virdee, Artistic Director of Darbar Festival and choreographer and dancer Jasmin Vardimon.
Sister Sledge will also headline the WOW Festival’s flagship variety show, Mirth Control on Sunday 13th March, which will bring together comedy and music in one exhilarating night hosted by Sandi Toksvig. Other guests include Sharon D. Clarke, Bonnie Langford, WOW Jazz Orchestra, Peggy Seeger, and the all-female amateur WOW Orchestra conducted by Sue Perkins and Sian Edwards.

Sister Sledge will also unveil exclusively to the audience, a full play of their soon to be released track – Women Are the Music of the World (WAMOW) – released in April 2016.

Music can truly unite people across the globe and these projects are fantastic ways to help encourage, empower and inspire other young girls and women to break glass ceilings.

We have also been excited to share a tiny glimpse of our forthcoming track Women Are The Music of the World (WAMOW) at events such as Walk in Her Shoes and also the forthcoming WOW Festival.

We have truly met so many WAMOW’s this week, women that are strong, confident and beautiful and that’s what, through our music, we aim to celebrate.”

The WOW – Women Of The World events (11th, 12th and 13th March) are free and open to ALL – The lively programmes will include female drummers, spoken word artists and entertainers, and live music from Sister Sledge, making this a family-friendly occasion for all. Be a part of this special event with legendary musicians and WOW veterans who are dedicated to changing the world and inspiring others to do the same. For further details please visit careinternational.org