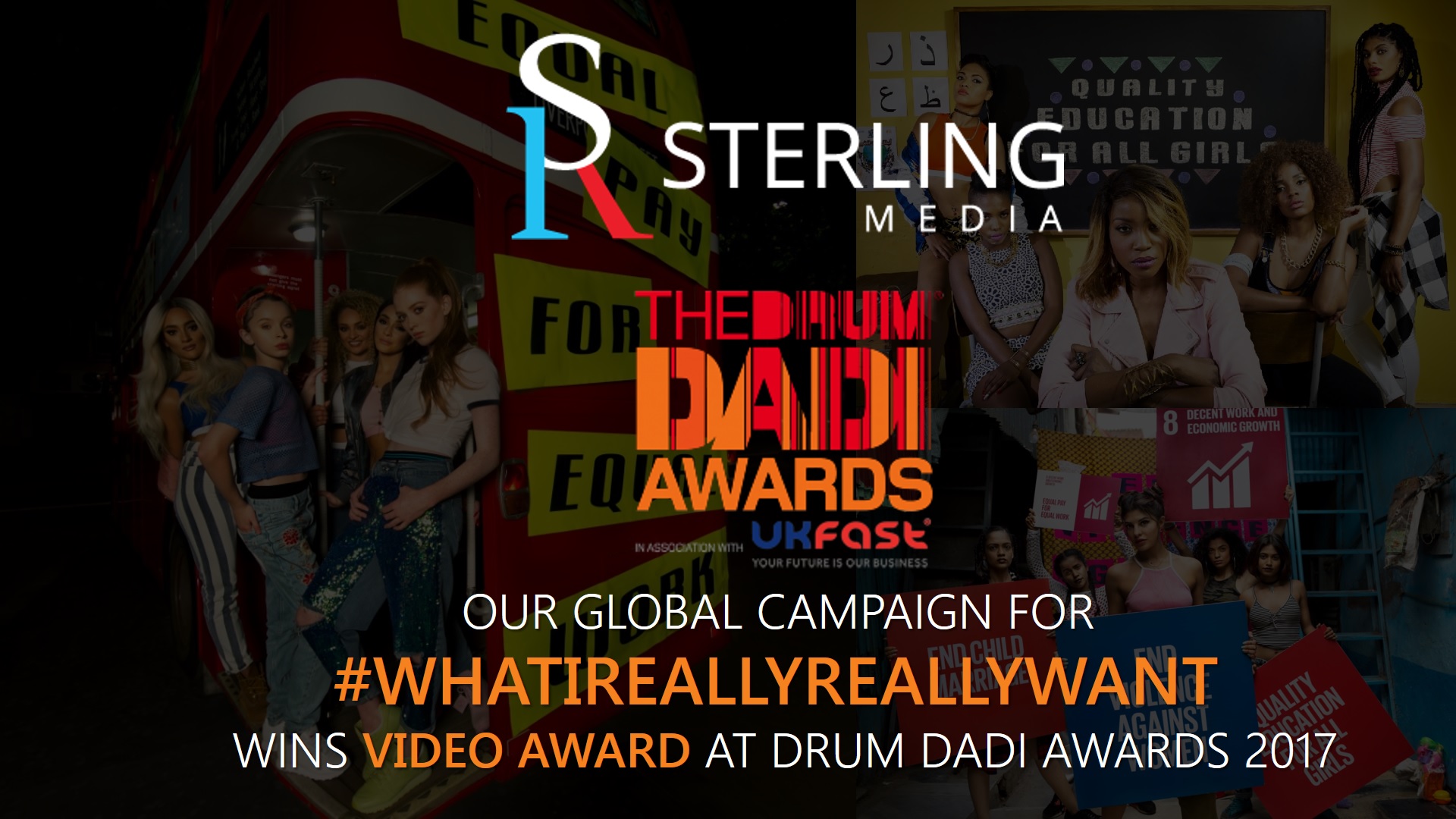 19th October 2017, London – The award-winning global PR and viral campaign for the film #WhatIReallyReallyWant by Project Everyone, supported by Getty Images and SAWA and launched by the international business and communications consultancy Sterling Media, picked up its latest accolade as it won the award for the ‘Video’ category at the prestigious Drum DADI Awards 2017.

The awards took place at the Park Plaza Westminster, London on Thursday 19th October, and brought together the digital industry’s elite to celebrate and reward their achievements over the past year.

Sterling Media was shortlisted for the Video/Video Website category alongside other innovative and creative agencies, but it was the iconic and inspirational #WhatIReallyReallyWant video that was recognised as the Video of the Year.

In September 2016, World Leaders marked the first anniversary of the adoption of the Sustainable Development Goals. These Global Goals are a mighty plan to end poverty, fix climate change and address inequalities over the next 15 years, but they will only succeed if they address the needs of the most marginalised first, particularly those of girls and women. Issues like quality education, an end to violence, an end to child marriage and equal pay for equal work need to be at the top of every government’s agenda in order to give the Goals the best possible start.

Founded by renowned filmmaker Richard Curtis for the United Nations and supported by the Bill & Melinda Gates Foundation, Project Everyone launched the United Nations’ Global Goals signed by 193 world leaders at the UN General Assembly in September 2015. In 2016, Project Everyone, with partners from across the world, convened the first Global Goals campaign with a focus on fighting and achieving Goals which are salient, financed and focused on girls and women.

On the 20th anniversary of the release of the Spice Girls’ Wannabe video, an updated short version of the iconic track was launched, “#WhatIReallyReallyWant”, to mark twenty years of Girl Power. The film reflects the voices of girls and women all over the world telling world leaders what Goals they ‘really really want’ to be achieved to help improve their lives. The campaign was supported by Getty Images and SAWA.

Sterling Media was engaged to launch and popularise the film globally, securing mass coverage in media in Europe, USA, India, the Far East, Australia and Africa. Sterling also secured talent such as Bollywood actress Jacqueline Fernandez, who opens the film. The video received support from high profile personalities such as Spice Girls Victoria Beckham, Melanie C and Emma Bunton on Social Media, the public and international media to help it generate a staggering 150 million views online in just a few days of its launch. The video was the 3rd highest trending topic in UK on Facebook in the first 24 hours after release.

Sterling Media is an international business and communications consultancy established in 1995 to represent countries, corporates, consumer brands, celebrities, charities, governments and thought-leaders. The company is recognised for being at the nexus of convening government, corporate, media, NGOs and celebrity, to help develop incisive business and communications strategies to bring clients closer to their purpose and ultimately the people they wish to reach. Sterling’s other clients in the campaigning and advocacy sector include Jamie Oliver Food Foundation, UN Environment, Sabin Vaccine Institute, Global Open Data on Agriculture & Nutrition (GODAN) amongst others.

Speaking about the company’s award win at the Drum DADI Awards, Natasha Mudhar, CEO and MD of Sterling Media said, “We are extremely delighted to have won this award, which stands as further evidence to the hard work and thought that went into the video and campaign.

From the moment we began working alongside Project Everyone, we were clear that #WhatIReallyReallyWant was a special project with the potential to galvanise social change and really bring girl power and empowerment to the fore.

It’s truly an honour to be recognised for our work in and amongst so many innovative organisations for an impactful campaign like #WhatIReallyReallyWant.

It was indeed a privilege to play a strategic role in taking the film global with the video being another example of the on-going remit of Sterling Media to focus on purposeful campaigns.”