AN EVENING WITH PACINO 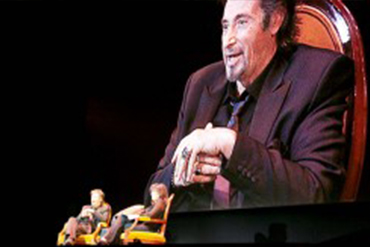 AN EVENING WITH PACINO

S2BN Entertainment is pleased to present AN EVENING WITH PACINO, the worldwide acclaimed event with one of cinema’s most riveting stars, Al Pacino.

Taking place at three coveted venues in Europe: Clyde Auditorium, SECC in Glasgow on 19th May, Eventim Apollo in Hammersmith, London on 22nd May and Bord Gáis Energy Theatre in Dublin on 24th May, the unique events will be an unmissable opportunity for fans in Europe to get up close and personal, sharing private moments with one of the greatest actors of his generation.

AN EVENING WITH PACINO marks a welcome return for Al Pacino to the United Kingdom following a sold out night at the London Palladium in 2013. ‘An Evening with Pacino’ will explore the myriad highlights of one of the most celebrated careers in acting history, from his time off-Broadway in the 60s right up to the present day. Highlights will include never before heard stories and exclusive clips shared by Pacino in intimate theatre surrounds. The evening will include an on-stage interview projected on a state-of-the-art large screen, bringing the action closer to the audience. This very special event will also give audience members a rare chance to speak directly to Pacino in an audience question and answer session.

“I’m very excited to be presenting these special events with Al Pacino,” said Michael Cohl, Chairman, S2BN Entertainment “he is one of the most talented actors of all time and to see him live, in person, and to hear his stories, and watch him go in and out of his most famous characters, is truly a unique experience”.

Al Pacino has created some of the most indelible character portrayals in cinema history, starring in over forty films that include The Godfather Trilogy, Dog Day Afternoon, Serpico, Scent of a Woman, Sea of Love, Dick Tracy, Heat, Scarface, Any Given Sunday, Donnie Brasco, Angels in America and, most recently, You Don’t Know Jack and Phil Spector for HBO. He is an eight-time Academy Award nominee and an Oscar winner for his performance in Scent of a Woman.

Pacino’s performances for HBO have garnered Golden Globe and Emmy awards for Angels in America and You Don’t Know Jack. He is one of the few actors to have won the triple crown of acting: the Oscar, Tony and Emmy Award. He is also the winner of the 2012 National Medal of Arts, AFI Life Achievement Award and American Cinematheque Award.

With an enduring devotion to acting, Pacino has become one of film and theatre’s most honoured artists, and one of the most famous and loved actors in the world. AN EVENING WITH PACINO is, undoubtedly, an exceptional opportunity to catch an icon in the flesh.

Tickets are available to purchase on www.ticketmaster.com and www.eveningwithpacino.com. Tickets range from £40 to £200. Additional ticket fees may apply.