EXCLUSIVITY MEETS OPULENCE WITH THE WORLDS RAREST SPIRITS AT THE HYDE 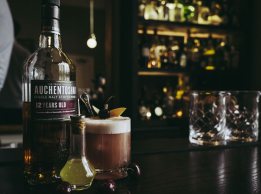 EXCLUSIVITY MEETS OPULENCE WITH THE WORLDS RAREST SPIRITS AT THE HYDE

~The newly launched bar The Hyde is offering guests the world’s finest and exclusive whiskeys and cognacs, most of them from the rarest collections ever produced, collectively worth over £100,000 ~

The Hyde, London’s newest, exclusive public house, at The Royal Park Hotel – a Roseate House Hotel, a luxury boutique hotel comprising three renovated, mid-19th century Grade II listed townhouses, has now expanded its refined luxury experience by introducing a collection of some of the world’s most exclusive, rare and fine Whiskeys and Cognacs behind its counters.

Connoisseurs can sample the selection of fine spirits valued over £100,000, some as old as 125 years, and a few being the last remaining bottles in the world, at The Hyde.

The Hyde invites you to experience a part of history or maybe just celebrate the spirit of life with any of the listed fine, smooth and exclusive whiskeys at offer behind its counters.