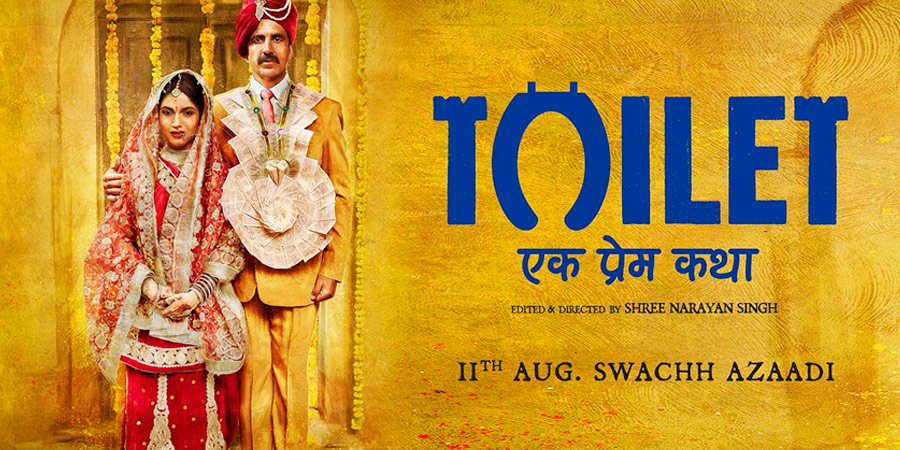 This Summer Sterling Media blended a passion for cinema and campaigning to launch one of India’s biggest film releases –the world’s first feature film on the open defecation crisis.

Sterling Media is an international business and communications consultancy, representing a range of clients from corporates to countries, charities to celebrities, consumer brands to changemakers, with a mission to bring brands closer to their purpose and to create impact.

We’re pioneers in taking Indian cinema global and have simultaneously launched some of the most high-profile campaigns to tackle social issues, including advocating an end to Open Defecation.

When things stand in the way of romance….a Toilet!

This Summer at Sterling Media, we blended our passion for cinema and campaigning to launch an inspirational communications strategy to raise awareness of one of India’s biggest film releases and the world’s first feature film on the open defecation crisis, Toilet: Ek Prem Katha (Toilet: A Love Story), starring megastar Akshay Kumar.

Set against the backdrop of Indian Prime Minister Narendra Modi’s Clean India movement to improve sanitation across India, ‘Swachh Bharat Abhiyan’, TOILET: EK PREM KATHA is a satirical and light-hearted take on open-air defecation in India, citing the fundamental need to provide households across the nation with a functioning toilet.

Aiming to tug on the heart strings of lovers around the world, who are willing to go to any lengths for their beloved, TOILET: EK PREM KATHA portrayed the real-life love story between Keshav (Akshay Kumar) and Jaya (Bhumi Pednekar), whose love transcended barriers of society and tradition but was challenged by the most unexpected hurdle, a toilet.

Conflict comes knocking on the first day of their marital life, when Jaya leaves Keshav’s house for good, after discovering that there is no toilet. With Jaya resolute against the village tradition of females gathering in groups to defecate in public before sunrise or after sunset, Keshav sets out on a mission to win back his love – by battling against the age-old values of his country.

TOILET: EK PREM KATHA comes as a result of some extremely damning statistics: 60% of the people in the world not exposed to toilet facilities are based in India alone, that’s 564 million Indians defecating in the open due to lack of facilities.

As well as being a major health, hygiene and environmental concern, open defecation is also accountable for over 50% of the rape cases in India. TOILET EK PREM KATHA is the true story of millions of women in rural India who till date, walk kilometres away from their homes just to be able to relieve themselves. At break of dawn or fall of dusk, these women face the risk of rape, molestation and/or kidnapping – an inconceivable threat for most of us when routinely going to the toilet. The film spotlights women safety, basic dignity and privacy which form the helm of an ever-growing urgency to address India’s open-air defecation issue.

Sterling Media has built a reputation for launching thought provoking campaigns to move the dial on a number of social issues. The campaign for TOILET: Ek Prem Katha achieved this by positioning the movie beyond the realms of entertainment to establish the film as a thought-provoking movement.

By targeting a global film audience, Sterling Media was able to secure standout  positioning media coverage from around the world in media outlets such as Los Angeles Times, ITN, The Times, Al Jazeera, BBC News, Channel 4 News, The Hindustan Times, CNN International, New York Times, The Guardian and many more.

To highlight the global significance of the film’s narrative, Sterling Media organised an International Media day in London which kick-started the film’s international promotions.

To draw appeal to a global audience, Sterling Media secured the support of Hollywood heavyweight and co-founders of Water.org Matt Damon and Gary White who praised Akshay Kumar and Toilet: Ek Prem Katha for their impact. Matt Damon said: “It’s great to have stars like Akshay and films like Toilet: Ek Prem Katha spotlighting the open defecation crisis, as it helps to drive more awareness of not only the issues but also what can be done to tackle this and create change.”

Within days of release, the film was able to rake in over Rs 100 crores (both domestically and at the worldwide box office,) proving a success with audiences. It is clear from audience response that Toilet: Ek Prem Katha is a global hit, everywhere from North America to India to Latvia, courtesy of Reliance Entertainment.

The production of Toilet: Ek Prem Katha was tantamount to the endless potential affiliated with the use of cinema as a vehicle for spotlighting critical social issues through entertainment, engagement and enlightenment. The project was also in-keeping with Sterling Media’s core mission to implement and progress social refinement for the betterment of human rights, equality and opportunity.