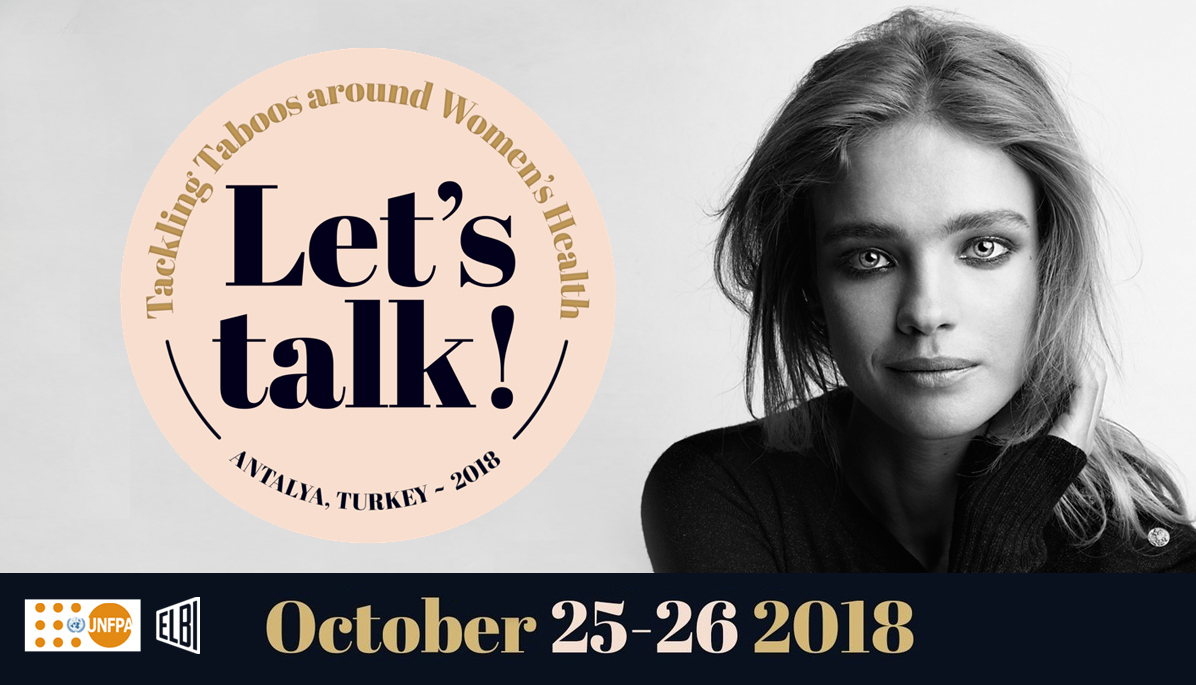 An ambitious new global initiative is launching to end the stigma and taboos around women’s health by providing a crucial podium for discussion and innovation – “Let’s Talk!” 2018 will take place on 25th-26th October 2018 at the Maxx Royal Resorts Kemer in Antalya, Turkey.

The two-day event has been developed with the ambition of creating an open platform to discuss issues such as the impact of societal taboos on sexual and reproductive health and women’s equality. The occasion will also celebrate and support the people and companies who are at the forefront of changing social norms based on rights, equality and inclusiveness.

Hosted by philanthropist, campaigner and model Natalia Vodianova, the initiative is powered by her digital charitable giving platform ELBI, and will be held in partnership with UNFPA, the UN’s sexual and reproductive health agency. The event will take place with the support of partners including Turkish Airlines, Maxx Royal Resorts and the Association of Turkish Travel Agencies (TURSAB).

Stigma and taboos around women’s health are pervasive in most societies and their effects have serious negative consequences, sometimes putting lives at risk. Taboos around menstruation, for example, can lead to women not having access to hygiene products, being deterred from taking part in school or sports activities, and risking infections and other complications.

Taboos around health education can also lead to young people not knowing how to protect themselves from HIV and other sexually transmitted infections, or early pregnancy. Stigmas around the sexual and reproductive health of persons with disabilities can lead to a lack of adequate maternal health services, and fear of repercussions for talking about domestic violence can result in women not seeking help despite being in an abusive relationship.

The event will commence with a networking reception on the 25th October and continue with a day-long forum on the 26th October, convening a series of global guests and influencers who share the common goal of removing the obstacles which currently prevent women from the prospect of a healthy future. The select group of courageous policy makers, influencers, entrepreneurs and activists will join Natalia to share and build on their ideas and innovations aimed at improving the lives of millions of women.

In the evening of 26th October, a special awards night will recognise outstanding achievements in combating taboos and stigmas around women’s health. This ceremony will celebrate some of the world’s most pioneering and progressive minds in the fight to empower women from all corners of the globe. From patrons of the battle against domestic violence to beacons of hope in the education of menstrual hygiene, the MAXX ROYAL Let’s Talk About It Awards will provide recognition for their inspirational endeavours. The event will be streamed live on Elbi and UNFPA social media channels, and viewers will be able to donate to UNFPA causes throughout the stream and through Elbi’s App.

Speaking about the 2018 “Let’s Talk!” event, Elbi founder Natalia Vodianova said: “I am very proud to be launching the “Let’s Talk!” initiative with ELBI and our partner UNFPA. A year ago, I began holding conversations with friends and colleagues about the taboos around periods and am so excited to broaden this conversation and bring it to a global level.

Too often women’s health issues go unheard and unnoticed because of unwarranted stigmas and taboos which have let far too many women down for generations. Now is the time to take a stand and begin to make strides in liberating women around the world, opening new doors and providing fresh opportunities. The changes we make now can help shape the destiny of future generations.

The event also represents an opportunity to acknowledge and recognize activists and advocates, who are making real progress for women’s health around the world, for their achievements.”

Discussing the event, Alanna Armitage, UNFPA’s Regional Director for Eastern Europe and Central Asia, said: “We are excited to partner with Natalia and ELBI on breaking the stigma and taboos that still surround women’s health. Any lasting change requires a cultural shift, and this is why engaging influencers and innovators is so important.

The “Let’s Talk!” initiative provides an excellent platform to bring together change makers from across society — governments, private sector, civil society, celebrities — and share and celebrate their successes in creating a world where women can exercise their right to health and well-being without discrimination, stigma or taboo.”