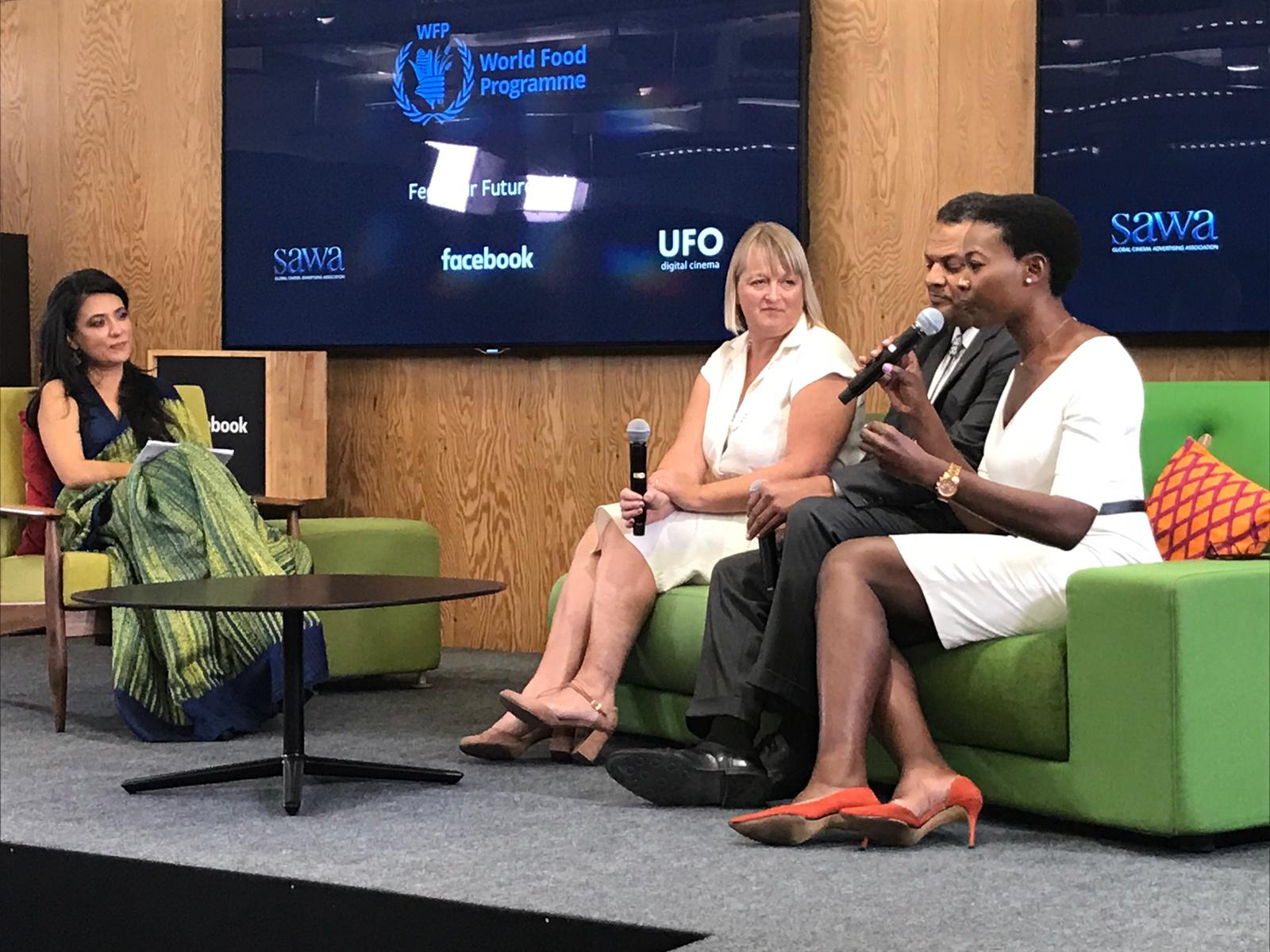 “This is the first time in India that a campaign of this magnitude has run towards a global cause,” said Sanjay Gaikwad, Managing Director of India’s largest digital cinema network UFO Moviez. “We’re happy to address the issue of global hunger in India with the World Food Programme. Cinema is the most impactful medium to deliver such a message to the audience in a highly captive environment. To add to this, UFO Moviez is the largest in-cinema advertising network and will run the emotionally stirring 60sec ad film across its screens for eight weeks.”

The 60-second cinema advertisement was conceived by advertising legend Sir John Hegarty and The Garage Soho. It was directed by acclaimed film director Lynne Ramsay and produced by award-winning production company Somesuch & Co. SAWA, the Global Cinema Advertising Association, in association with WFP, will air “Feed Our Future” on cinema screens in more than 30 countries with a call to action to download WFP’s mobile-app, ShareTheMeal.

The advertisement shows a bustling news conference with journalists vying to interview the recipient of a breakthrough medical research award. But the journalists learn that there was ultimately no medical breakthrough – the chilling conclusion reveals that Miriam Adeke, the young woman in question, had in fact died of hunger when she was only eight years old.

“The creative challenge here is to find a way of engaging the audience without resorting to endless images of starving children. Creating empathy by reminding the viewer that when a child dies, we all lose,” said Sir John Hegarty.

Inspired by the cinema advertisement’s message, Facebook is bringing the campaign to life through an integrated digital campaign. Borne from a “Hack for Good” at the recent Cannes Lions Festival for Creativity, the Facebook Messenger experience was created by a team of award-winning creatives from across the industry and Facebook’s Creative Shop to give viewers the opportunity to engage with the character from the advertisement and learn more about hunger. At a time when 821 million people – roughly one in nine of the global population – still go to bed on an empty stomach, this new digital integration will bring the offline online by connecting viewers with the cinema advertisement and the issue in an exciting new way.

“Hunger is a major global issue,” said Cheryl Wannell, CEO of SAWA. “It is therefore fitting that the Cinema medium, with its global reach, should be proactive in driving awareness for the World Food Programme. Millennials who are educated, socially aware and a hard to reach demographic, make up a large part of the Cinema audience and these are the people that can and will facilitate change. Since 2015, the Cinema Medium has stepped up to support the Sustainable Development Goals and we are committed in 2018 and beyond to make the World Food Programme famous by using the power and impact of the Cinema Medium. SAWA encourages other mediums to do likewise.”

The Facebook Messenger experience will enable viewers to engage with the ad’s main character, Miriam Adeke, to learn more about her story and the issue of hunger by searching ‘ShareTheMeal’ on Messenger.

“Three million children die every year of hunger or malnutrition,” said Corinne Woods, Director of Communications, Marketing and Advocacy of the United Nations World Food Programme. “When partners like SAWA and their members step up, it helps us create a movement and generate support for our work to ensure that every child has the vital food and nutrition they need – not only to survive – but also to thrive.”

Thanks to UFO Moviez’s generous support, the advertisement will air on UFO Moviez’s screens across India for the next eight weeks, and the message about aiming for a world with Zero Hunger will be heard by millions across India. For more information about the “Feed Our Future” advertisement and campaign, and to learn how to get involved in creating a world with Zero Hunger, please visit: www.wfp.org/feedourfuture.