The trailer of megastar Akshay Kumar’s upcoming courtroom drama Jolly LL.B 2 released today and the reactions are outstanding! The film that is inspired by true events, gives audiences a taster into the story of the blunt, abrasive and yet oddly compassionate Jagdishwar Mishra, aka Advocate Jolly (Akshay Kumar), a small-time, struggling lawyer who moved from Kanpur to the city of Nawabs, Lucknow, to take on the establishment.

Directed by Subhash Kapoor, the trailer of Jolly LL.B 2 was first unveiled to over a hundred thousand fans who participated in a unique digital interaction that enabled them to exclusively preview the trailer ahead of its official public release. A first for Indian cinema marketing, social media platforms went into meltdown as fans took to Twitter and Facebook to applaud the film, causing the hashtag #JollyLLB2Trailer to trend at number one position in India within minutes.

Some of the audience’s reactions included: 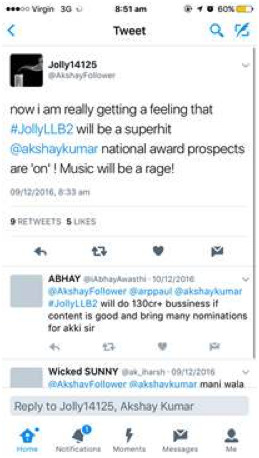 Critics and media alike also applauded the courtroom dramdy with comments such as:

Indian Express: Full of humour, action and Akshay again showing that he is not afraid to step out of his comfort zone, the trailer makes for a great watch.

bollywoodlife.com This Akshay Kumar starrer is a perfect blend of goofiness and hard hitting cinema

The Times of India: Akshay Kumar is promising as Jolly in ‘Jolly LLB 2’ trailer

DNA: Akshay Kumar promises to give us the biggest courtroom drama ever!

India Today: Akshay’s performance as a slimy lawyer hints at nothing but greatness.

Inspired by true events, the absorbing trailer showcases a gamut of emotions from comedy to drama to thrill, giving audiences a glimpse of anarchy, mayhem and underhandedness in a courtroom setting. Akshay Kumar is seen buttressing his legal arguments with rhetoric’s necessary to establish his case, many of which will become signature dialogues. In a courtroom scene where in his portrayal of Advocate Jolly, Akshay Kumar is in the course of an argument with veteran actor Annu Kapoor who plays the role of the ruthless Advocate Mathur. In Akshay Kumar’s inimitable style, he raises the ante for tongue in cheek humour as he poses a frivolous question pertaining to one of Bollywood’s top stars, Salman Khan, and whether he will ever get married, leading to a courtroom in chuckles. 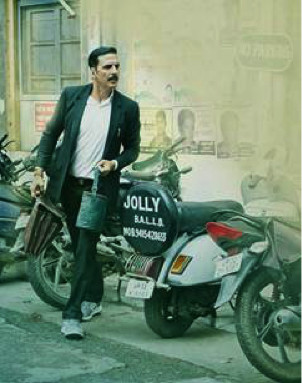 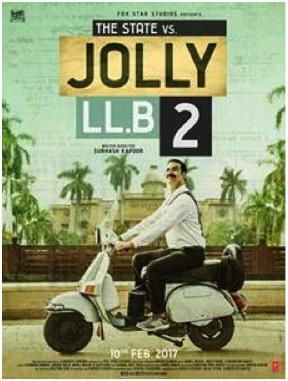 However on the other hand, Saurabh Shukla, who reprises the role of Justice Surendralal Tripathi, grins in irritation. Through the glimpses that we see in the trailer, it’s evident that Jolly is a lawyer with no scruples and that he will go to any level to win a case, affirming that “A good lawyer never returns the fee”. Audiences get a glimpse of Advocate Jolly’s underdog persona, as he attempts to catapult himself to the top of the legal food chain. However he seems to go to an extreme when he takes on an infamous case and wins, as a result freeing a criminal who committed a much bigger crime. This leaves Jolly in a quandary and the rest of the film’s plot revolves around Jolly’s struggle to find justice as he undergoes a moral transformation of sorts to set things on the right path.

Akshay Kumar is clearly leading the charge in the second instalment through the character of Advocate Jolly – right from his unforgettable appearance where he sports a thick moustache with well-oiled side parted hair, to his exceptional comic timing which has become second nature to him, he steps into the character with aplomb to deliver a role which many are saying will further cement his position as India’s most versatile artist.

The trailer also introduces the leading lady of the film Huma Qureshi, who plays the role of Jolly’s love interest. The trailer release of Jolly LL.B 2 has already laid the ground for welcoming Jolly and his inimitable ways to the big screen, who will not only leave a smile on your face but will also make you look at society and system through a very subtle satirical filter. Jolly LL.B 2 releases in cinemas on 10 February 2017 through Fox Star Studios.